William Gibson wrote that the soul, like lost luggage, needs time to catch up with the long­ distance traveller.

Maybe that’s why I feel… discombobulated as I wake to the scrunch of rain turning to ice outside an unfamiliar window. This is not my bedroom in Tokyo. Then some part of my jet­lagged soul catches up, and I remember: I’m back in Toronto, my first trip “home” for Christmas in 15 years.

Still woozy from the dislocation in time and space, still moving under water, I throw on every stitch of warm clothing I brought, grab a camera, and stumble­tiptoe out the slumbering guesthouse and into the gentrified Cabbagetown neighbourhood downtown.

The scrunch of rain into ice is louder out here. The canopy of maple trees, the park benches, the renovated workers’ cottages, have come alive in a Tim Burton­esque web of freezing branches and power lines dripping with short, sharp little icicles pointy as teeth.

This magical, fantastical nightmare before Christmas.

The next few days I trip through the streets of my hometown, the familiar made strange, taking more pictures and waiting for the jet lag to subside enough to make me fit, once more, for human company.

Streetcars, overhead lines frozen solid, stand abandoned in the middle of the road. Bicycles, billboards, movie posters, hand­lettered signs to lose weight or earn $10,000 a month: in my heightened state, all seem preserved in a Pompeii of ice.

Outside a church, I mistake a statue for a real person. Later, on the university campus, I mistake a real person for a statue — until a pair of police officers shake the snow off the frozen figure and bundle… him? her? into the warmth of cruiser.

This is not the Toronto the White Christmas I rhapsodized to my wife back in Japan. That Toronto is a wintery wonderland of sledding — even skiing — in the parks, in the ravines that cut through the city, An urban pastoral, powdery snow transforming the gritty streets into the Christmas dioramas in the windows of the department stores of my childhood.

No, this is the stuff of TV melodrama. Winter is coming. White Walkers approach the gates Rob Ford, Toronto’s crack­smoking mayor, refuses to call a state of emergency. Never mind that, in the near north of the city, above the shore of an ancient lakebed which divides the city north/south, hundreds of thousands of homes, including my family’s, including my friends’, go days without heat and light. Even downtown, where I’m staying, some neighbourhoods have lost power. Mornings, McDonalds and Tim Horton’s are full of these temporary evacuees as they warm themselves after a night in a dark, freezing home.

“Really? Do you REALLY think this is the time to tease your sister? Tommy, I need you to stop being six.”

Speaking of coffee, to show everyone just how cold it is, weathercasters toss cups of boiling water in the air to show how quickly it turns into a fine, icy powder.

“It’s probably, like 10 degrees above zero and sunny in Tokyo right now,” I tell friends and family, and aloof bartenders at those Dundas West hipster joints.

But Tokyo is another hallucinatory trip. (Was that my soul I saw out the airplane window, still playing catch­up over the Pacific?) I return to a city where people on trains, on streets, in Starbucks, go about with white gauze masks over nose and mouth. No, it’s not fear of radiation from the still­leaking Fukushima Dai­ichi nuclear power plant. It’s allergy season, made worse than usual by a cold, record snowy winter.

Still, my neighbour’s plum tree has its first light purple blooms of the season. Soon it will be sakura cherry blossom season, the first real harbinger of spring. Everyone breathes a — pollen­laden — sigh of relief.

Soon enough we’ll be back in Tokyo’s tropical summer, hot and getting hotter. Worse nowadays than Bangkok or Singapore, they say, though perhaps those cities are also heating up along with Tokyo, along with Toronto, along with everywhere else, it seems, and we’ll all wax nostalgic for winter again. 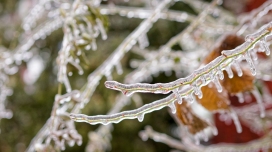 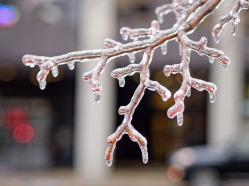 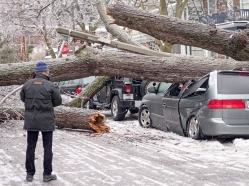 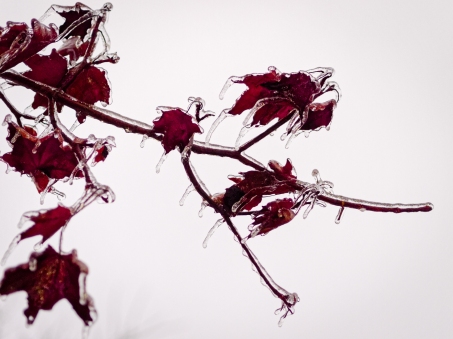 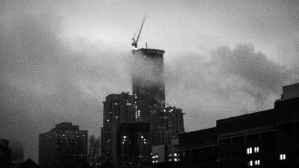 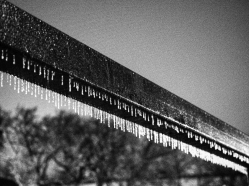 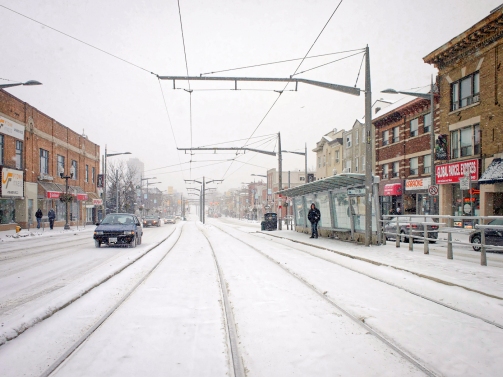 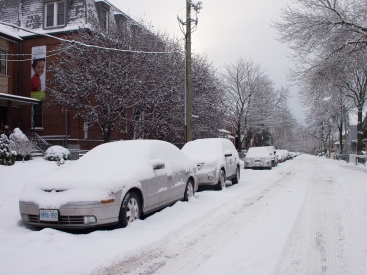 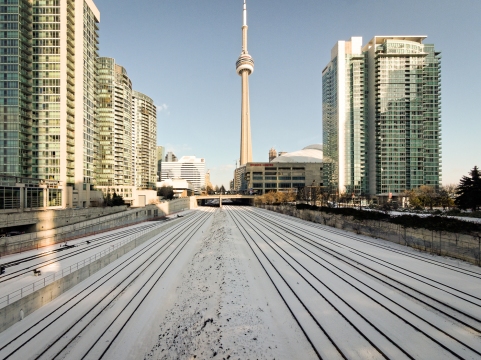 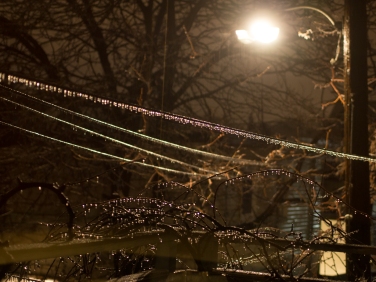 This magical, fantastical nightmare before Christmas.

England’s The New Idealist magazine have published in their first anniversary, “Doomsday Edition”, a dispatch from me  about the extreme winter weather in Tokyo and Toronto this year.  Check it out on page 9. Check out the other articles, too, of course. But check page 9…

The New Idealist magazine is online and downloadable for free at www.thenewidealist.com.

… Just back from reconnoitring the ‘hood.  This morning at 3am, all I could hear was the scrunching sound of rain turning to ice on tree branches and power lines. Now, at 11 at night, it’s the steady drip of that same ice melting off those same branches and lines. The sidewalks and streets are running with meltwater. Streetcars are once again rolling along Dundas and Queen.

A deep freeze is apparently on the way, down to -14 by Tuesday night, but for now temps are staying north of freezing. Hopefully this meltoff wiff help Hydro crews restore power to the 350,000 people in southern Ontario without power…

The ice storm has ended in Toronto, but the aftermath continues.  Fortunately, the strong winds some were forecasting didn’t materialize. Not so fortunatrly, enough freezing rain fell and turned to ice that the city is close to a state of emergency: the TTC has been disrupted, and streetcars have been stuck in place, literally, all day as their power lines are coated in ice. 250,000 homes are without power, and they’re predicting it’ll take ’til Christmas to get everyone back on the grid. Large branches and whole trees are down around the city, especially in woody areas such as The Annex, as in the picture posted above that I took today on Walmer just north of Bloor. Not pictured: the great tangle of power lines the tree brought down with it.

So, the city is down but not out. Mayor Rob Ford (yes, that Rob Ford) has so far not declared a state of emergency. And Torontonians are tough. But a cold spell’s a’comin, and things could get worse before they get better… 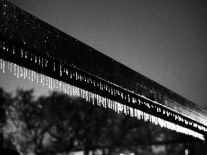 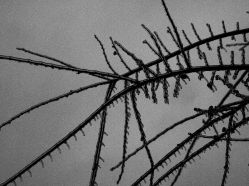 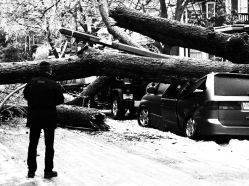 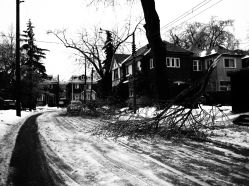 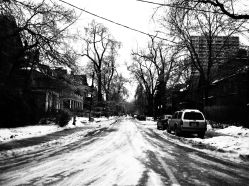 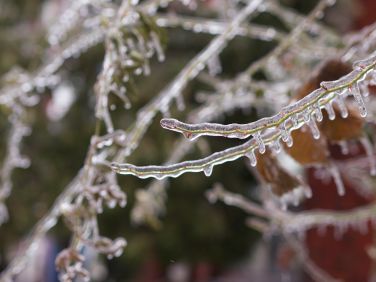 Well, it looks like I managed to arrive in T.O. just in time for a major ice storm, which may include major power outages and a virtual shut down of the city.

Last summer I arrived just before a record-breaking heat wave. Hmn… pathetic fallacy notwithstanding, I can’t help but feel a little responsible.

https://www.youtube.com/watch?v=YfcNRWefEEU Memories of the Montreal Ice Storm of 1998. My then-partner and I arrived back in Montreal just in time to be part of one of the city’s worst natural disasters. I remember how surprised we were as we drove into town by truckloads of soldiers on Rue St-Laurent: the first time Canadian soldiers were deployed in Montreal since La crise d’octobre of 1970, when the FLQ kidnapped government officials and the Wartime Measures Act was enacted during peacetime for the first – and only? – time in Canadian history.

We came through that ice storm unscathed, not losing heat or electricity. I remember how eerie it was to walk up St. Laurent at night, seeing only candles flicker in the windows of the apartments for block after block after block.

Hopefully this weekend’s storm will be less dramatic. Apparently the prediction is, this won’t be as severe… http://globalnews.ca/news/1045228/looking-back-at-the-ice-storm-of-1998/